Skip to content
The Mount Aventine manor house, constructed in two phases in 1840 and 1860, is one of Charles County’s most important antebellum houses. The 1840 portion of the structure, designed as a “side passage” house, includes a kitchen wing constructed of cut stone, unique in homes of this period in southern Maryland. In 1860 the house was expanded to the center hall design you see today. The house and viewshed were listed on the National Registry of Historic Places in 1996 (www.nps.gov/nr/). The property is notable for being one of the few Potomac River plantations essentially retaining its original patent boundaries. The house is situated on a high terrace and commands a broad vista of farm fields and the Potomac River. The view across the Potomac to the Virginia shoreline is undoubtedly one of the most beautiful in the area. Mount Aventine’s commanding site led to its use as a signal point for Federal troops during the Civil War.
Patented in 1673 to Luke Gardner, the plantation was purchased in 1751 by Nathaniel Chapman, a wealthy Virginia planter. Members of the Chapman family lived on the property until the early twentieth century. The Chapman family had extensive ties to many prominent Virginians, including George Mason of Gunston Hall (www.GunstonHall.org.) and to the family of George Washington. In addition to the plantation operations, Mount Aventine boasted several commercial enterprises based on the Potomac. From the time of the Revolutionary War, Chapman’s Landing was one of several important ferry crossings connecting Virginia and Maryland. By the 1840’s, the Chapman family ferry boat business had expanded to include a steamboat wharf and served traffic from Washington, Annapolis and Baltimore. The Potomac River fishery at Chapman’s Point began as early as 1740 and operated into the twentieth century. 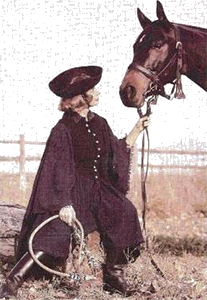 Mount Aventine changed hands several times in the early 1900’s. From 1938-1954 it served as a part time residence and hunting preserve for the Hubbard family. In 1954, Margit Sigray Bessenyey, daughter of a Hungarian count and an American heiress, purchased the property and set about acquiring other parcels which had been sold from the original tract. Ms. Bessenyey was a noted horse breeder who bred and trained horses at Mount Aventine as well as at ranches in Montana and California. The property served as a part time residence until Ms. Bessenyey’s death in 1987. A tribute to Margit Sigray Bessenyey by Ernest Szecheny provides more insight into the Countess and her life, including how she helped save a stock of Hungarian horses that were being disbanded by the U.S. Cavalry.

Additional information on the marriage of Ms. Bessenyey’s parents, Harriet Daly and Count Anton Sigray, can be found in this article from the The Salt Lake Herald-Republican dated March 27, 1910.

The State purchased the property from a developer in 1998 preserving this unique property for public use.